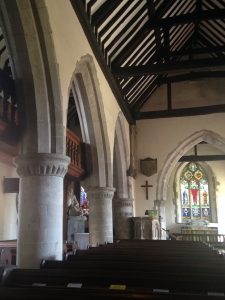 To the North of the Nave are five pillars. These are part of the original Norman church; built about 1150, of which only these pillars and parts of the west wall remain. The Tudors built up the wall of the north aisle, causing it to move. This accounts for the leaning Norman pillars and the great beams in the nave roof which hold the walls together. 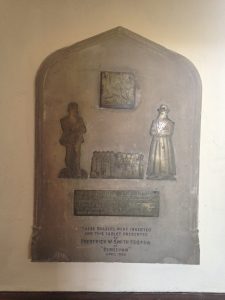 On the left of the north aisle is the Selwyn Brass. Dated 1587, it commemorates John Selwyn, gamekeeper at Oatlands Palace for Queen Elizabeth I. The five-part brass shows his family in everyday 16th century clothes. The eleven children all survived childhood, which was rare at that time. The centre brass depicts John Selwyn mounted on a stag, plunging a dagger into the beast’s neck in front of the Queen. 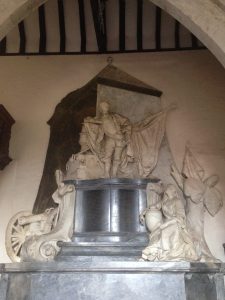 The memorial to Field-Marshall Viscount Shannon, who lived at Ashley House and died in 1740. This memorial is the most outstanding in the church, not just for its size but for its artistic quality. It was commissioned by his daughter, Lady Middlesex, from Louis Francois Roubilliac, the famous sculptor then active in England. It was restored in recent years by English Heritage. 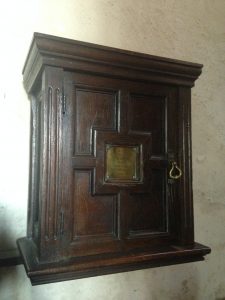 To the right of the Shannon Memorial is a box containing a reproduction of a Scold’s Bridle. The original, stolen in 1965, was dated 1633 and came to the Parish in 1723 from Chester, inscribed ‘Chester presents Walton with a bridle to curb women’s tongues which talk too idle’. 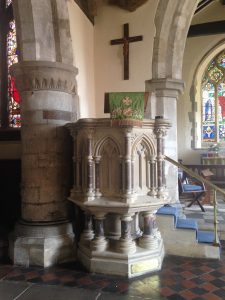 On the column next to the pulpit is a rhyme attributed to Queen Elizabeth I, thought to express her belief about the meaning of the Holy Sacrament:

Christ was the worde and spake it
He took the bread and break it,
And what the worde doth make it,
That I believe and take it. 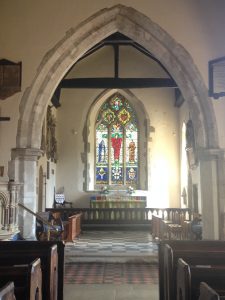 The chancel, the holiest part of the church, was built in the 14th century. The piscina and openings in the south wall were all uncovered during restoration in 1903. One of these openings may have been an Easter sepulchre for the Reserved Sacrament during Good Friday. 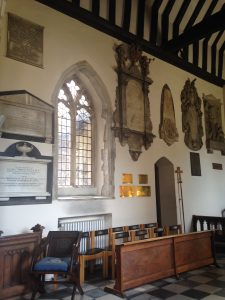 The chancel contains a number of interesting memorials.

Dr. Matthew Kirby, DD and his wife Elizabeth. The Doctor was ejected from the living of Shepperton for some unknown reason in 1704. His wife’s charities helped to found the United Walton Charities, which administer local Almshouses.

Henry Skrine, over the vestry door, was a traveller and writer. The bas-relief is a pun – an oak tree screening (skrining) younger trees. The trees, which are bare of leaves, denote children who predeceased him.

William Lilly, commemorated by a memorial slab on the floor, was a well-known character and foremost astrologer in the 17th century. He also practised medicine (under licence from the Archbishop of Canterbury) and was a ‘double agent’ during the Civil War. Accused of starting the Fire of London, having forecast the event 15 years earlier, he cleared his name before a Parliamentary Committee. He later became Churchwarden of this church and a benefactor to the church and needy of the area. 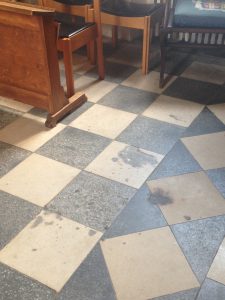 On the floor near the Chancel steps are marks left by fire bombs during the 1939-45 war. 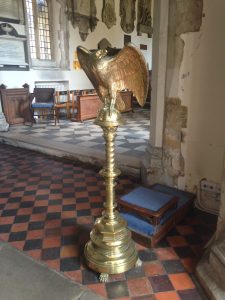 This is used for readings from the bible every Sunday.

On the south-west face of the pillar near here pilgrims, (possibly on their way to Canterbury), carved votive crosses in token of their vows. 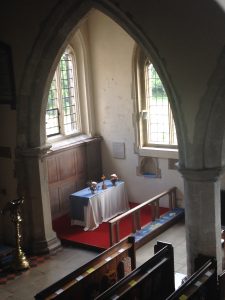 The Chapel of All Saints is in the south aisle. The Chapel is a token of the link with Henry Bowett, Archbishop of York, who became patron of the living in 1407. The altar in the chapel is 17th century and, at one time, was the high altar. The altar rail and Reredos panelling were added in 1967. 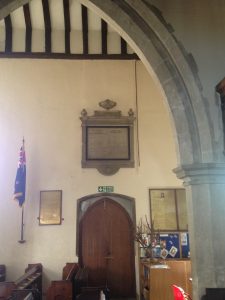 The memorial over the south door, which now leads to the choir vestry, is to the family of Admiral Lord Rodney. 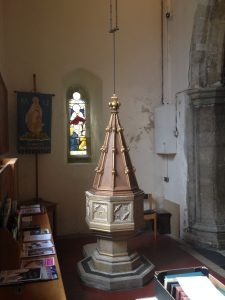 The Baptistry was created as a memorial to Walton parishioners killed in the First World War. The gallery above the south aisle was taken down and the font moved from the north aisle to its present location. During the work a 14th century window was discovered in the west wall, and stained glass was inserted in the lancet frame. The Baptistry also houses the Book of Remembrance, which records the names of those whose ashes are interred in the Gardens of Remembrance in the churchyard. 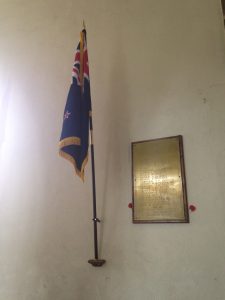 The First World War brought a close association with New Zealand. Altogether 27,000 New Zealanders were nursed during that period at Mount Felix, which had been taken over as a hospital. A brass plaque near the West Door was put up in 1921 recording their stay in Walton and also commemorating seventeen members of the New Zealand forces who died there and were buried in St Mary’s Churchyard. Their memory is also honoured at the annual Civic Service on Anzac Day in the presence of the New Zealand High Commissioner. 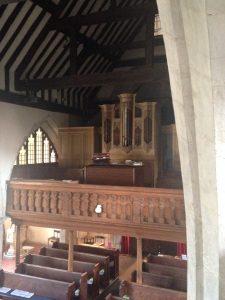 James I and his court frequently stayed at Oatlands Palace. Their presence increased the population of Walton so, in the early 17th century, galleries were built on the west and north sides of the church. A south gallery was added in 1765 but removed in 1922 when the Baptistry was created. The balustrade of the north gallery contains some original Jacobean carving, although much has been restored or replaced. We believe the original organ in the west gallery was built in 1673 by Bernard Smith for Charles’ II private chapel in Windsor Castle. It was reputedly brought to Walton in 1711. A new pipe organ was installed in 1936, and replaced with an electronic organ in September 2002, but the original casing and Smith’s prospect pipes were retained.

The Tower is thought to have been built in 1450, but was much restored in the 19th century. It houses a peal of eight bells that, together with their hangings, weighs nearly seven tons. The bells, cast between 1606 and 1883, are:
Treble by John Warner & Sons, 1883
Second by John Warner & Sons, 1883
Third inscribed ‘The gift of John Palmer Esq. High Sheriff of the County, 1726′
Fourth by Joseph Carter 1608
Fifth by Richard Eldridge, inscribed ‘Our Hope is in the Lord, 1606′
Sixth by Warner & Sons, 1883 (formerly a 15th century bell)
Seventh by William Carter, 1610
Tenor by Brian Eldridge bears the names John Taylor & Thomas James, Churchwardens, 1651

You can learn more about the bells here.